January 20, 2008
Well, ever since Zac, we felt like we successfully replenished the Earth, but we wanted to multiply as well. By two, apparently... 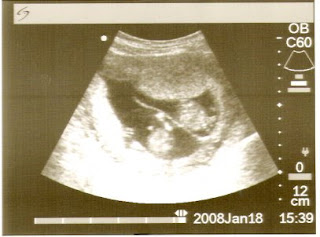 This is the ultrasound from Kristi's visit to the Ob-Gyn on Friday. The fact that we were pregnant came as no surprise--we've known for about three months. But, twins! (For those who don't see it, yet, the two circles are two separate heads, there is a film down the center indicating two separate sacs, and there are two placenta, one in the upper-right and one on the lower-left.

We are not going to find out their genders, as usual, and so, we are trying to come up with good name pairs, given the combination that comes out. If it is two girls, we are hoping to use a name that we have already picked out: Felicity (we will call her Lici). For the second girl, while it is long, we thought that a cute combination name would be Serendipity. I know. It's a 5-syllable name. We'd call her Wren, so it wouldn't be so bad. I like it because Felicity means 'happiness', and Serendipity means 'unexpected happiness', which is exactly what the second girl would be. (On the other hand, we could do Serenity, but it's not as cool of a meaning...)

If it is two boys, I am really big on several scriptural combos, including, but certainly not limited to:
Along with non-scriptural duets:
If it's a boy and a girl, though... I'm not sure. See, we will still use Felicity for the girl, and so we need to come up with something that works for the boy that compliments the girl name. (Note: For those asking, "Why do they need to compliment each other?!", well, you should know me by now... :) )

So, I just did a search on http://www.babynamesworld and found that "Asher" means "fortunate" or "blessed". Maybe Felicity and Asher for the boy-girl combo. Or maybe we could go the alliteration route and do Felicity and Finlay (fair warrior). Finlay is a name that I have liked for a long time.

Well, we fortunately have until about July to decide. The 40-week date is July 21st, but the doctor said that they take twins at no later than 38 weeks, which would be July 7th. Maybe we ought to think of patriotic names then... :)