July 20, 2008
So, the other day, I discovered some inverse laws regarding our family that I hope will be helpful to future generations:

- The Law of Cleanliness Being Next to In-Law-ness: The mutual awareness of the uncleanliness of the house increases as the distance between the house and an in-law decreases. For about the last six weeks, Kristi's mom has been very kind to come and help take care of the kids while I was at work and Kristi was either on bed rest or taking care of two new ones. What I observed was a positive correlation between the rate at which we tried to straighten up the house and Cathy's (Kristi's mom) temporal distance from the house (ETA):


With a little bit of work, we can establish the mathematical relationship as follows, where x is Cathy's ETA: 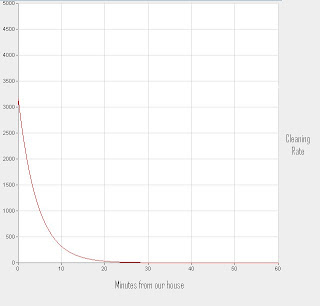 As you can see, the relationship is exponential and leaves us cleaning at a rate of over 3000 hs per sq. ft. each second as her car is pulling up into the driveway.

Before really delving into any analysis on this relation, I should explain how I got my units of measure for "Cleaning Rate". hs, meaning "hand swipes" seemed to encapsulate both the cleaning that we as parents did, the simultaneous messing-up that the kids did, and the general mayhem that was just everyone running around the house swiping their hands over everything in the final seconds of the ordeal. Thus, a higher Cleaning Rate should not be equated with a clean house or even a house that is becoming cleaner, but, instead a house where the attempts of the parents to clean the house, the childrens' attempts to make it messy again, and general attempts at swiping over general square footage in an attempt to grasp at progress become more fervent.

This graph explains well the several interesting phenomena observable at our home seconds before in-laws arrive. For example, with four people (Kristi, Remi, Zac, and I) engaged in "cleaning", let us divide the Cleaning Rate evenly among them. Taking into account that our house is 2060 square feet, we will designate 515 square feet per person to make this distinction. if we are to consider a hand swipe to be about 3 in, a pretty conservative estimate, one's hands break the speed of sound at about 8.6 hsfs (hand swipes per square feet per second), or, roughly, the 26 minute mark. With about 15 seconds to go, the average hand speed in the house is 348 times the speed of sound, which, as much as we would like to hide it, leads to quite the cacophony of aftershocks once an in-law arrives. More interestingly, Remi and Zac have usually been bound to chairs with duct tape somewhere around the 2-minutes-remaining mark, which means, in order to sustain the Cleaning Rate that the data suggest, Kristi is cleaning at roughly 1392 times the speed of sound; fast enough to get her to the moon (which she often arrives at when you add in a dinner that we are preparing for the in-laws as well) in about 13.5 minutes.

Needless to say, our house is often still messy by the time the doorbell rings. Fortunately, the in-laws don't really care...do they?