How to Juggle Five Balls 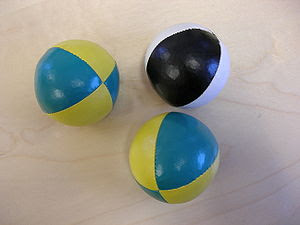 Image via WikipediaWay back in the summer of 1997, I attended my first World Juggling Day event in Magna, UT. There I met two fellow jugglers who would become long-time friends, Arwen and Merlyn Hall. I had already known how to juggle three and four for years at that point, so I asked Arwen about juggling five balls, and that summer's obsession was born.

It look me three months of practicing for about 30 minutes nearly every day, but by the end of the summer, I had it down and could even do a few tricks. Here is what I think were the keys:

I don't think I could have done it without learning this pattern first. Since I already knew how to do four, it wasn't too difficult. The basic rhythm is to do four as a cascade, each hand throwing two balls in a row; right-right-left-left-right-right-left-left. As you get better at the rhythm, it will start to sound like one-two-three-four-(gap)-one-two-three-four-(gap). The better you get at producing the gap at an even meter, the easier it will be to add a fifth ball.

The idea is to get you used to the pattern without balls flying everywhere. :) A couple of other patterns that were helpful to me were juggling three, and then flashing three. Flashing three balls is basically throwing them faster and higher enough to have time to clap while they are all in the air. From a siteswap perspective, it is 5-5-5-0-0. The other that was helpful to me was the 5-0-5-0-5. This pattern is throwing three balls from one hand to the other; right-right-right-left-left-left. These weren't as helpful to me as the five-with-a-gap, but they were certainly nice variety.

I suppose this isn't an option for everyone, but it really, really helped me to be able to show off every week. :) I would meet with Arwen and Merlyn at the Redwood Recreation Center in Taylorsville, UT every Saturday. Arwen would show me her devil sticks and I would show her five balls and we'd practice, practice, practice.

Opportunities to do this are easier to find than you think. On Saturday mornings, we would go to that rec center and, during the winter, we asked if we could juggle in a room in the rec center. The room they gave us had big windows and was right by the gymnasium where kids would play rec basketball. They would see us doing cool tricks and come in to be taught how to juggle.

It was so much fun!

Sometimes, we were teaching ten kids at a time. We learned the patterns better ourselves when we taught them to other people.

Oh, and did I say practice? To juggle five balls, you will need to practice every day. Focus on catches and tosses, and be patient. It will look awesome when you are done!