November 01, 2010
Halloween is a difficult time for me. My heart says, "Dress up as something really nerdy!" whereas my head says, "If you do that, you'll be explaining it to non-nerds all day long!" On Halloween, my heart usually wins.
So, just in case there are any super-nerds out there, here are my five nerdiest costumes ever:
1997 - The Information Super Highway 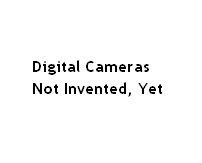 We were sitting at Grandma and Grandpa Cummings's house, trying to decide what I should dress up as for Halloween. I had always tried to be something clever--I mean, in the third grade, I was a garbage can, and what could be more clever than that?--but this year I hadn't been able to think of anything at all.
Actually, my wife will attest today that last-minute costumes are my specialty, but that is because I am no longer a teen with gobs of time to obsess for weeks over minutiae like the best Halloween costume (no offense to any teen that is reading this). Now, I have to obsess for weeks over the best Halloween costumes for my kids.
Anyway, we kids were just getting a flavor for the Internet back then. My Dad first brought a Juno CD home back in 1995, and we set up our first email accounts. No one emailed me, of course, because no one else had an email address. I was even an uber-nerd back then: my email address was jzheauxoughsieph@juno.com. Jared would email me, but he was a nerd, too.
Back then, though, we'd call it the Information Superhighway. So, I got this idea. We had a couple of little stuffed animals that we'd won at a fair or something. I also had some black sweats and some packaging tape. Donning the black sweats, I placed strips of tape down the center to look like t
he dividing line on the highway. Then, we pinned the duck and another animal to the "highway". Voila! To make it that much better, we took my unicycle and painted the tire white, then rolled the tire over the duck so it was clear that the animals had been hit by careless Republicans.
Then, to make it the information superhighway, I took one of the covers from my circuit board journal (yes, I had a journal with real circuit boards as the covers), and taped that on one of my legs. It kept falling off, but that was kind of the nature of computers back then anyway since they were all running Microsoft Windows.
So, that year, I got my first taste of having to explain my costume to someone, namely, my grandma.
(No animals were harmed during the production of this costume.)
2003 - Barcode 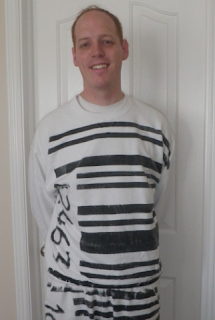 This Halloween was just one month before Kristi and I were married. This idea occurred to me a couple of weeks before, but I didn't do anything about it until the morning of. Kristi was about to find out how important a good Halloween costume was to me.
With white sweats this time, I placed masking tape horizontally across the top and bottom except in the appropriate place for the barcode numbers. I used black paint of come sort for the bars and numbers and white paint for my face (the picture shown doesn't have the face paint). Then, I took the masking tape off.
To Kristi's chagrin, I also painted my tennis shoes white.
The white face paint turned out to be a bad idea since they hadn't invented teeth-whitening toothpaste at that point in history.
Most popular question that year: "Hey, does that bar code really work?"
2008 - A Java Virtual Machine 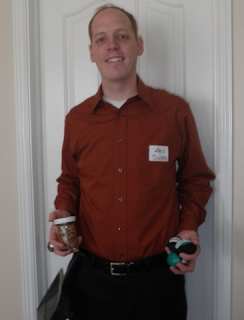 In an attempt to talk to one another about very abstract programming concepts, programmers give metaphorical names to them. For example, the process that a Java Virtual Machine (JVM) undertakes to retrieve unused or orphaned memory from a running process is called "Garbage Collection". This term was invented before Al Gore's movie, otherwise it might be called "Recycling Collection". How terribly silly we were back then.
This costume takes advantage of many of those terms to make a costume out of an incredibly complex thing. Let's look at it step by step:
White sticker that says '.NET Sucks' - Rivalries exist even (especially!) in programming. The nerds who like the Java programming language, like myself, like to make fun of its closest competitor, .NET, particularly because it is produced by Microsoft. Naturally, then, a ".NET sucks sticker" would be only appropriate for the JVM.
Bean jar - Since 'java' is coffee, the things that are managed by the JVM are often individually referred to as beans. (ha ha) When several beans are bundled together in a compressed archive for distribution, it is called a jar. Thus, the jar of beans in my hand.
Dust pan - Garbage collection
Juggling balls - This is what made the costume awesome. You have probably recognized that programs sometimes generate (only?) errors. Sometimes, they are errors caused by the user inputting something incorrect while other times some part of the internal system has broken down. In all cases, the JVM can throw exceptions that then need to be handled by the running application.
Different exceptions have different names. For example, if the program tries to read something from memory and it fails, the JVM will probably throw an IOException, meaning "input-output exception".
So, I took little pieces of address label, and wrote "IOException," "NullPointerException," etc. on them, and brought them with me as well. Throughout the day, I would randomly throw them at people and tell them I was just throwing exceptions. Very therapeutic. The best idea ever.
2009 - Code Nazi 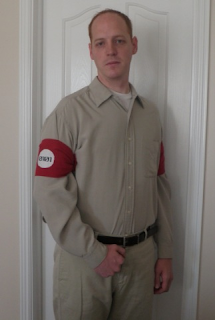 If you ever watched Seinfeld, you probably saw or heard of "The Soup Nazi". I'm not sure if the expression "the (insert word here) nazi" to describe a strict and aggressive authority on (insert word here) was invented on Seinfeld or not, but for a while it seemed like everyone was a seatbelt nazi, a policy nazi, or a jello nazi. A "code nazi," then, is someone who is an over-the-top enforcer on good coding practices.
The red bands were red cloth napkins that Kristi so kindly went out and bought for me that morning. I took some white cloth and cut out a circle, printed out "0101" on heat press paper, and then ironed the 0101 onto the white circles. Then, we glued the 0101 circles to the red bands, put on a military-looking business-casual shirt and voila! it's a disturbing, yet funny, nerd costume.
Costumes like these are especially funny when you work for a super-conservative organization like the LDS Church.
The only real problem with it was telling the kids what I was dressed up as.
2010 - The Phantom Reference This was definitely the hardest costume to put together, and it was also the nerdiest. Yes, I painted all of that on my face by myself. Okay, with the help of some instructions I found online.
I actually think that this costume escaped many nerds as well because they just weren't quite nerdy enough.
So, back to garbage collection. The JVM maintains a table of entries that point to locations in memory that a running application uses to store information for later use. These pointers are also called references. There are different levels of references that the garbage collector uses to decide which references are more eligible for garbage collection, like a priority list. The list goes: Strong Reference (ineligible for garbage collection), Soft Reference (kind of eligible), Weak Reference (more eligible), Phantom Reference (basically being collected right now).
You see the genius now, don't you? The arrows on my head are pointers to locations in memory, and I am a "Phantom Reference" (as opposed to the Phantom Menace).
Plus, I got to attack random programmers with my two-headed light saber.

Jennifer Eliza said…
So what costumes over the years have you choosen for your kids & have they been just as geeky as your own?
12:53 PM