Starting Your Own T-Shirt Shop: What Makes a Good Pro-π-etor 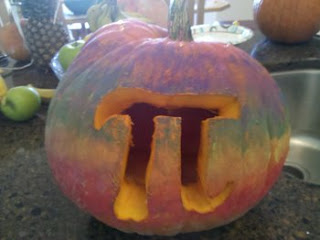 (This is the second in a series of posts about how I started The Pi-Dye T-Shirt Shop. I hope that it's helpful to someone out there that is trying to start their own business.)

If there is one thing that made our t-shirt shop successful (and a whole lot funner (I know that "funner" isn't a word, but doesn't "a whole lot more fun" sound less fun?)), it is the fact that we nearly turn into pi an extreme sport, including it in every aspect of marketing, delivery, and operations that we can think of.

A few years ago, I noticed, like many of you probably did, that in addition to most prices ending in "9", most Walmart prices ended in "8". If you are into Internet Marketing at all, most of those prices end in "7".

Noticing a possible pattern, and being a hopeless nerd, I decided that all of our prices would be multiples of pi. Our first "real" online shirt was listed at $12.56, which is $4*pi. This hasn't led to as much utter chaos as I had hoped as I thought it would. Online, they are listed as "$4pi (12.56)" because I'm a wuss and fear mad customers seeing $12pi, for example, and not realizing that that order total is $37.68.

Not being quite nerdy enough, we went a step further and charged pi for shipping. This also had the hidden advantage of being able to call it "Shipping and Handling" and not making our customers feel like they were getting take for a ride.

At our conferences, we will often do a Hap-Pi Hour at 3:14 pm. At this time, things are $pi off or something like that.

We have been in business for 2pi years. If you have a hard question, go talk to the pro-pi-etor (it even says "pro-pi-etor" on our business cards). When we hand out change, we say "here's your delta" instead of "here's your change". Our sales guys give the customers "high-pi"s instead of "high-5"s (I'll explain this later).

(For those baffled by what a high-pi would look like, I will explain. First, do a high-3 with the individual. For extra nerdiness, say "3" as well. Second, do "rocks", and say "point". Third, do a high-1 and say "1". Fourth, turn your hands like you are going to shake with four fingers (no thumb) and wiggle them together and say "4")

So, we do our best to go over the top with the theme, and our customers appreciate it.