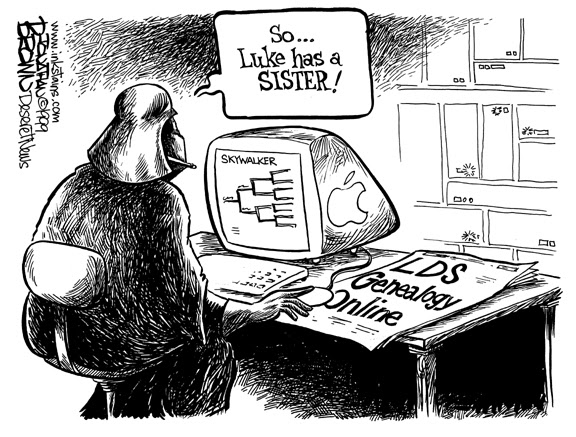 Last Sunday, I was working on my genealogy on familysearch.org, a free site provided by The Church of Jesus Christ of Latter-Day Saints for doing pretty extensive family history. While looking for information about a Thomas Neal, I found an individual who had done a bunch of work on his family including is tie into the Garland family, which tied in through Thomas's wife.

So, while I was pondering what to do about Thomas Neal (who's parents I still haven't found), I clicked up the Garland line. It was pretty cool because it went really far back; it's always fun to see that there were real people who you are really related to back in the 14th century or what not.

As I worked my way back through the tree, I noticed it dead-ended at Sir Thomas Morieux, who, according to the chart, was the maternal grandfather-in-law of Humphy Garland (b. 1376).  The name sounded pretty official, so I thought I'd Google him. I learned from Wikipedia that Sir Thomas Morieux married Blanche de Plantagenet in 1381.

I added Blanche de Plantagenet and found that a great deal of research had already gone into her line. In fact, it was there that I learned that Blanche was the daughter of John of Gaunt who was one of the five sons of King Edward III. How exciting! 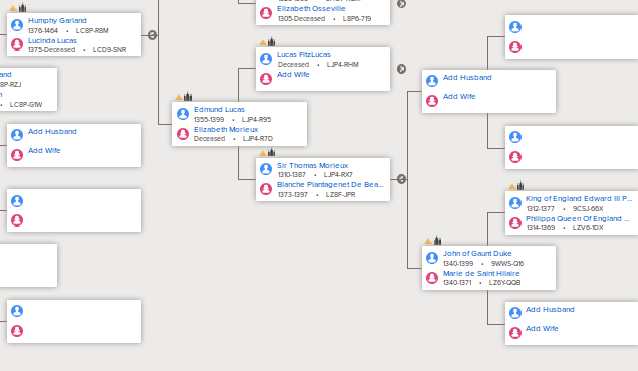 At that point, I just started clicking around seeing how far back a kingly line could be taken. Click by click I would go further and further back, Henry III, Alfonso IX, and on and on. I alerted my wife who was, at the moment, unimpressed. "It's a royal line," she kept saying.

However, she and I both started to become intrigued when we saw that the line stretched *way*, *way* back. We found ourselves in the 800s, the 600s, the 200s. We had followed the Plantagenet family's ancestry through Spain, Portugal, and France until we came back to England through King Coel (yes, Old King Cole).

Then, it began to dawn on me:  James, the brother of Jesus. I pulled out my Bible and looked up the genealogy for Joseph and for Mary. To my amazement, there in my family tree, were THEE Joseph and Mary! 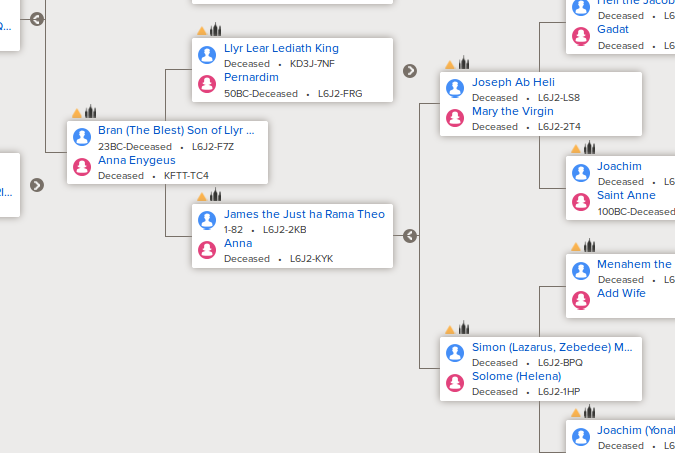 Of course, you can't stop there. Now, there are 70-something generations listed right there in the Bible for the taking. And so it was:  I clicked back until I saw "King David", and continued on to "Abraham" and the tree finally stopped at "Adam". :) 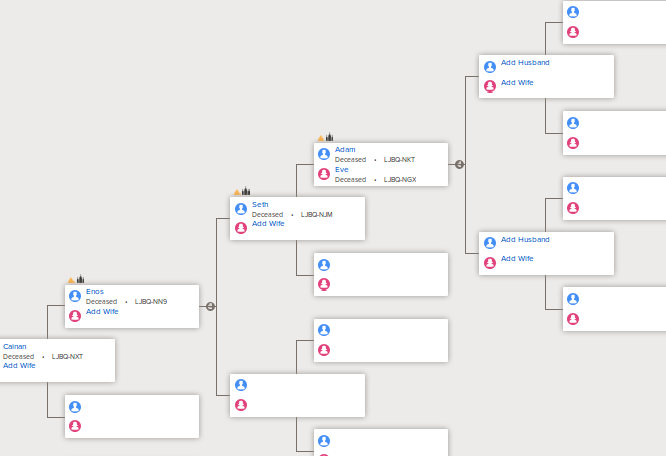 (Funny thing about software, by the way; it allowed me to add a mom and dad each for Adam and Eve. :))

So now, of course, I was obligated to work my way back and do some counting. How many generations are there between me and Adam, the father of man? It turns out that you can put a number to something like that and it turns out to be 141.

141? That seems low. Given a 30-year generation gap, that would put only 4230 years between me and Adam. A quick check at the bible, though, shows that there are 1556 years between Shem (one of Noah's sons) and Adam, which is much larger than the 300-year gap that it would be where the generations 30 years apart.

Remembering that Abraham was 100 years old when he had Isaac gives us another 70. At that point, it's close enough for me to be about right on the number of generations, even if the chart isn't quite right...

So, is it all correct?

Well... As I fairly quickly found out, many genealogies online borrow from other online genealogies instead of going back to the primary source, much like reading someone's blogs or tweets without doing background research as to their authority.

The first thing I looked up was who Bran the Blessed was. There is a legend embedded into English Christian history that St. Phillip sent a commission of brethren including Joseph of Arimathea over to Britain in order to introduce Christianity to the masses. The story goes that Bran married Joseph of Arithmathea's daughter Anna, also called Enygeus, and was instrumental in converting the island to Christianity. Decended from this lofty heritage are the legendary Grail Kings of Briton.

Is this true? Well, there is no real record of it other than tradition, so historians say "no". Oral traditions have a tendency to evolve over the years, but maybe.

On a couple of different lines, I'm tied back to King Coel. There are a couple of different ways to get there, but one is based on a claim that Saint Helena, mother of Constantine, was King Coel's only daughter. The belief is that this is where she was trained in royal traditions and where Constantine became a Christian. There is a book that claims that Constantine "picked up" his Christianity in Britain, but nothing that states that she was British herself. It seems like the most likely birthplace for Saint Helena is in Drepanum, Bithynia, Asia Minor since that location was renamed to Helenopolis by Constantine after her death.

Once we get to King Coel, the theory is that we tie back to Bran the Blessed through a couple more generations. 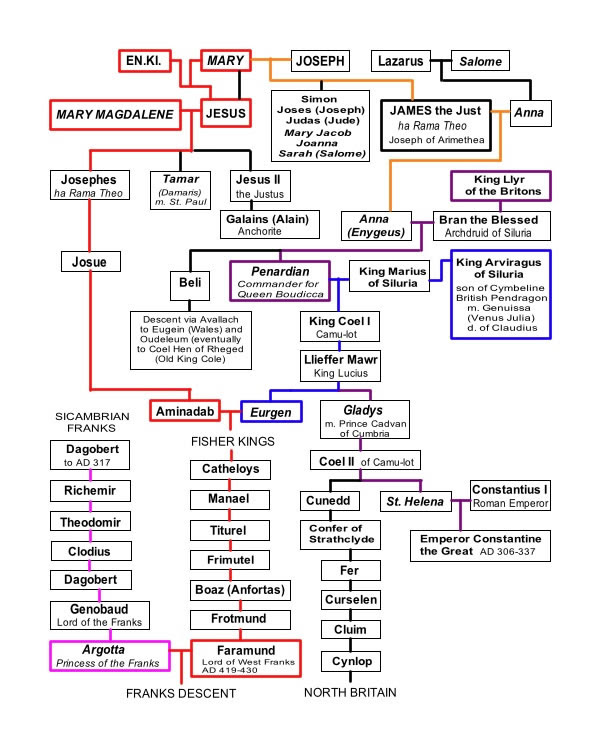 In my research of the legend, I found a fascinating pedigree chart entitled the Desposyni which claimed not only that the British royal line was descended from Joseph of Arimathea and that Helena was descended from King Coel but also that Jesus had descendents! These included great-grandson Aminadab who was the ancestor of the Grail Kings of Briton from the paternal line.

Given all of that, folks who tie back to the Fisher Kings (as my genealogy purports) have at least some people in the world who would then assert that they are *both* descended from Jesus and from his brother James. Wow.
It all sounds pretty apocryphal from my vantage point, but I learned about entire faith traditions that firmly assert this pedigree. There is even a book from Latter-Day Saint Vern Swanson that asserts that Joseph Smith's father and mother both descend from Jesus and Mary Magdalene.

Well, what about the rest of the line?

Okay, so this is going to take a bit to unpack, but for now I'll start at the beginning of the line.  Going back to original records, there seems to be some doubt that not Elizabeth Morieux is actually the daughter of Sir Thomas Morieux. The argument, basically, is that Thomas married Blanche de Plantagenet in 1381 and died in 1387, leaving no issue. Further, Edward Lucas was born after they were married (by about 25 years). There is a different Morieux, though, referenced in the visitation records: One Sir John Morieux who was born in 1310. It clearly states that Elizabeth is the daughter of John. This basically shoots the entire line out of the water unless John Morieux is somehow related to the rest.

Well, darn.
This precipitated more research; I wasn't able to find Sir John Morieux's spouse, but I found another line via my maternal grandmother that goes back through the Singletons into the same general mileau. It turned out to be pretty easy. So, then I started thinking...

Is this really that special? 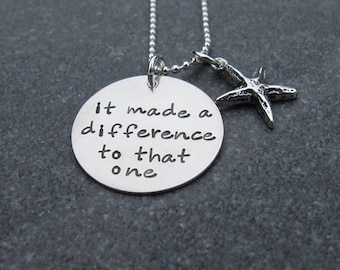 However, I believe it *is* cool, because I found my particular story. Using similar research strategies (from other lines that didn't have the Morieux linkage problem), I found that I'm descended from Richard II of Normandy, William the Conqueror, Rei Alfonso Henriques, and more. Probably most people have a way to tie back to these individuals, but discovering my own branch was ethereal.

It was totally awesome seing Rei Alfonso Henriques in my lineage because he was born in Guimaraes or Viseu, Portugal, died in Coimbra, and was the first King of Portugal. These are all areas in the Portugal Porto Mission where I served from 2000-2002. It's neat to think about the Portuguese, whom I served, were likely my distant relations.

Find your own story

This was so much fun researching my family line and finding some pretty amazing people in it. It was a complete paradigm shift for me to even think about there being real people who lived and died in a part of the world and in a time that was completely out of my peripheral vision.  Quite honestly, short of a handful of historical individuals, I have always packed the years from about 400 AD to 1000 AD into the same basket as I did Herriman, Utah before I moved there myself ("what, there are people that live there?").

Oh, and for my own family, if you want to find what I found, look along the Singleton line through Great-Grandpa William Shelton. If you don't mind suspending reality for a minute, I haven't disconnected the Edmund Lucas -> Thomas Morieux line yet, which you can find through Thomas Neal, through the Laker line from Grandma Dora LaRee Laker.

August 25, 2015
Somebody asked me a question about my Tooth Fairy post the other day that got me thinking. How many baby teeth are lost every day in Utah?

I began with Googling. Surely someone else has thought of this and run some numbers, right? Lo, there is a tooth fairy site that claims that the Tooth Fairy collects 300,000 teeth per night.

That's a lot; however, when I ran the numbers, it started to seem awfully low.

Let's assume that the Tooth Fairy collects all baby teeth regardless of quality and we assume that all children lose all their baby teeth. The world population of children sits at 2.2 billion, with 74.2 million of them in the United States. Of those, approximately 896,961 of them are in Utah. This means that somewhere around .04077% of the world's children are in Utah.

If we assume that kids in Utah lose teeth at the same rate as all other children in the world and that each day in the year is just as likely as the rest to lose a tooth, then we have that of the alleged …
Post a Comment
Read more

Mental Math Tricks: Is this divisible by 17?

Divisible by five:If the number ends in 0 or 5, it is divisible by 5.

October 21, 2011
I read an article by Brad Rock this morning where he quoted heavily from Dr. Thomas Forsthoefel who was giving his opinion on religious institutions being involved in sports. BYU, of course, came up.
I think Forsthoefel came off sounding a bit misinformed about the culture, drive, mission, etc. of BYU. Below is the email that I sent to Brad Rock this morning after finishing the article:
Brad -
That was an interesting article. I tend to disagree with Forsthoefel, though, or at least disagree with what I may have read into his comments.
A quote in your article says:
"There may be a kind of growing pain. BYU is in the real world and the real world works on Sunday. Can we (BYU) live with the adjustment? I'm empathetic with that, whatever decision is made, people are going to be unhappy.… Some will say get with the program, we'll be OK at the next level, others will say we've sold out and we've made a deal with the world."

This seems to suggest one or two things; fir…
3 comments
Read more